This Quarter in Play: The (not so) secret language of playfulness

Part 1 – Play with the city

“Say you don’t know me or recognize my face
Say you don’t care who goes to that kind of place
Knee deep in the hoopla, sinking in your fight
Too many runaways eating up the night“

The lyrics of the mid-eighties hit “we build this city” clearly describe what sometimes gets labeled as play in urban environments. Play with the city has long been an issue of discussion, from the right to the city (Lefebvre, 1968/1996) to the urban dystopias (Ladiana, 2017) created by todays’ cities’ layouts. In essence, play with the city entails expressing our playful selves with and within all sorts of urban spaces, not necessarily the ones purposely designed for such activity (i.e. playgrounds).

These expressions of playfulness convey many meanings. The song’s paragraph cited above relates to anonymity and individuality. The city is this space shared by so many of us that we don’t know and often do not even care about who the other players are, where they come from or where they go. As long as their actions do not interfere with ours, of course.

While some may consider playing in urban spaces as a fight, and even a clandestine activity, it comes down to how we frame the context and the meaning we give to it. What is the big difference between the hop-scotch drawn on the pavement and the one drawn on the walls? The former can be described as cute; what is not to like about irregular lines traced with chalk on broad daylight for children to hop and play? Let’s face it, many of us are compelled to skip on one leg and reach the 10 when seeing such creations on our sidewalks. The latter, carefully drawn with spray paint, generally during the night and out of the sight of other people, might be classified as vandalism (or street art, depending on who you ask). As it is likely to be on a wall, hardly anyone will feel invited to hop on it, though maybe, for some, it is the whole point of the game. The actions are pretty much the same; a drawing on a public surface. The means used for their creation and the meaning that we give to these expressions of playfulness are what make a difference.

Urban gamification can be defined as an action of playfully and systemically shifting the meaning of urban spaces, resemantisizing them (Thibault, 2018). This ability to change the meaning of our surroundings without modifying them is highly influenced by our perception and behaviors within the city. In many ways, these urban spaces also impose levels of control on our playfulness. For example, the proliferation of shopping centers is turning inhabitants into consumers (Ladiana, 2017), inhibiting playfulness and normalizing the act of consumerism as part of our interactions with the city. On the other side of the spectrum, we have Do It Yourself urbanism. DIY urbanism is often defined as a group of spatial, cultural practices that make informal physical alterations to the urban built environment (Orum and Douglas, 2021). Sometimes, these demonstrations are considered illegal and even a type of civil disobedience (Sibbald et al. 2017). This disobedience can be regarded as a form of re-appropriation and repurposing of public spaces to transform our surroundings into something meaningful that conveys a message to others. From subtle flower patches on sidewalks to loud flashmobs and other artistic demonstrations, these actions connect people with the city and with others in a different way than before, even if it’s only for an instant.

Playfulness, which is not to be confused with humor, is an expression of play, a state of mind or a personality trait. Some people may be very familiar with this attribute and embrace it; others are more cautious in its presentation. Either way, the capability to reimagine and repurpose spaces is more advanced among individuals who are actively looking for something to do with their environment than with the space users who do not see any meaning in it; perhaps not even realizing they exist until the space is not able to fulfill its intended purpose (i.e. not noticing the sidewalk until there is a crack on it that makes one stumble). Some may argue that play in the city could lead to the tragedy of the commons, violating Locke’s principles of communing; this is, depleting the shared resource by using it for one’s self-interest. The situation is that something that some of us may consider a flagrant disruption to our right of certain space (a clean wall, for example), may be a very agreeable image for somebody else, normally the authors of the piece. Nonetheless, urban gamification brings about moments of playfulness that enable citizens to feel connected with their cities and with other inhabitants, cementing the notion that “cities that play together stay together” (Thibault, 2021).

Unquestionably, our lives and interactions with the city (and with each other) have been reshaped by the ongoing pandemic. Some examples include the proliferation of desire paths, and teddy bear hunts, to name a few. Last year, a friend told me that walking on the streets felt like “performing a dance with strangers, one where everyone tries to find the best way to avoid being close to each other.“ The same friend reckoned that, when looking around and seeing the rainbows drawn by kids displayed on the windows, it was possible to notice how we all tried to encourage each other to hang on and stay hopeful because, together, we can go through this— these were subtle, playful messages full of meaning.

Although the song claims that “we build this city on rock and roll,” the truth is that each of us builds the city on, with, and through our unique interactions with it. This quarter’s blog entry, is an invitation to go out, look around and challenge ourselves to be a little playful with our cities (always keeping it safe!). Remember: we build this city. How? That is up to us. 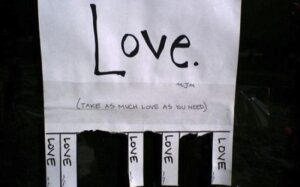